As we turn the page on 2022, we leave behind a year that was historically challenging for investors. U.S. stocks finished the year down -19.3%, while international stocks returned -14.4%. Despite the down year, over the past five years U.S. stocks have risen 51.0% for an average annual return of 10.2%. (2) In fixed income, the bond aggregate index was down -13.0% in 2022, capping off the worst year for bonds on record. (2) The fourth quarter was not short on headlines, as investors weighed the implications of decelerating inflation, a prolonged war in Ukraine, and U.S. midterm election results, but the main driver of markets continued to be the Federal Reserve.

In Q4 the Federal Reserve raised its overnight policy rate three times by 0.75%, 0.75%, and 0.50%, respectively, to a final rate of 4.50%. These moves capped off the steepest series of rate hikes in 40 years. (2) In addition to raising interest rates, Fed Chairman Jerome Powell used his press conference rhetoric to manage market expectations around future monetary policy, resulting in tightening financial conditions and a slowing economy. Evidence of slowdown was seen in the Leading Economic Indicators index (LEI), a forward-looking gauge of business conditions, which declined to a level of -1.05 in November. Prior to 2022, the LEI had fallen below -1.0 nine times, and in eight of those instances a recession occurred. (2)

On a positive note, the Fed’s actions and subsequent higher interest rates seemed to slow down inflation. The Consumer Price Index (CPI) readings for October and November were each lower than expected, signaling inflation likely peaked in June at 9.1%. Falling prices on key categories within the CPI readings, such as goods, used cars, and commodities contributed to the decline in inflation. Improving supply chains and consumers’ spending shift from goods to services also helped. Housing inflation remained elevated in the fourth quarter, but recent data on home starts and new mortgage originations suggest a decline in home prices and rents in the coming months.

In November, all eyes were on the U.S. mid-term elections, where Republicans seemed poised to win seats in both the House and Senate. Although the party failed to meet the high end of their goal, they did manage to take back control of the House and create a split party government. Markets tend to react positively to a split government because current policies will likely remain status quo.

Shortly after the U.S. elections, Russia retreated from their last Ukrainian stronghold in the city of Kherson. The retreat was a major development in Ukraine’s yearlong resistance, and with little occupied territory in Ukraine, Russia began using long distance missile strikes on Ukrainian infrastructure. The people of Ukraine will be tested by limited power during the winter months with no immediate offramp to the war in sight.

In our Q2 commentary “Don’t Fight the Fed”, we emphasized the Federal Reserve was determined to beat inflation, even if that meant causing a slowdown in the economy. Because of the Fed’s restrictive policy, we believe the primary risk to investors is no longer inflation, but a recession caused by higher interest rates.

Coming into 2022 we maintained an under-weight allocation to long duration bonds, choosing instead to focus on investing in companies that could pass through rising costs to their customers as inflation spiked. But after a historic rise in rates, we are now tilting diversified portfolios towards high quality bonds. In our Q3 market commentary “Bonds are Back”, we voiced our belief that high quality bonds now provided sufficient income for retirees, while also serving as a hedge against the risk of recession. For the past decade, bonds did not offer that same proposition, as historically low interest rates provided bond investors little income and opened them to interest rate risk. 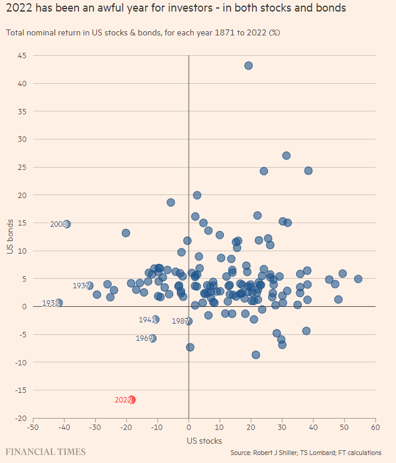 Equity markets have been rangebound since June, as investors recalibrate the value of growth stocks at higher interest rates. The current price to earnings valuation metric of U.S. stocks is 16.6, which is in line with the 25-year average of 16.8 (3). While we believe investors are not significantly overpaying for stocks at these levels, there is a chance that equity valuations overshoot to the downside on near term recession concerns. Stock prices tend to bottom before the real-world economy bottoms, but we remain cautious on areas for equity investment in the short term. Investors with a multi-year time horizon would be well suited to start building positions now in high quality names, but those who are focused on spending needs in the next year should be cautious. Near term we currently favor equities uncorrelated to the economy in sectors such as healthcare, consumer staples, and defense spending.

In conclusion, while JFG continues to monitor and adjust portfolios to the new investment environment, it is more important than ever for investors to maintain a portfolio allocation that is suitable for their financial goals, risk tolerance, and time horizon. A new year brings a new opportunity to check in on financial goals and priorities and we are here to help. Once every six years investors are faced with a market decline of at least -20% (4), and staying focused on a financial plan is paramount to successfully navigate temporary downturns. We do anticipate a choppy market as the Federal Reserve tries to engineer a soft landing for the economy, but in the long run these are the moments where investors generate positive future returns.

Thank you for your continued trust in Juno Financial Group.